To the Editor of the Adelaide Register 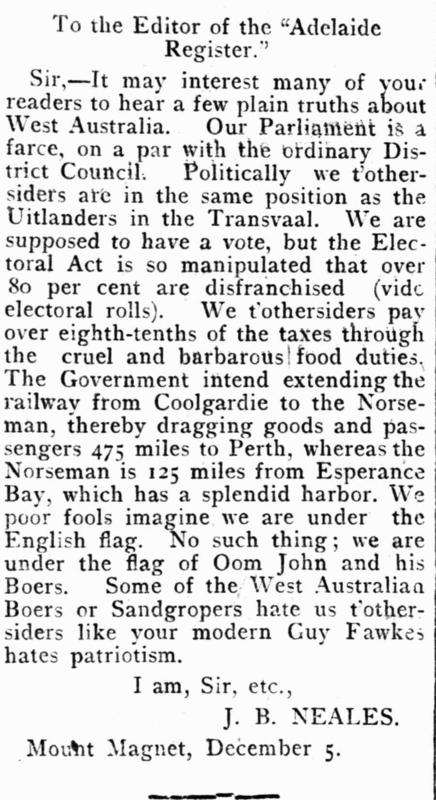 To the Editor of the Adelaide Register

Letter to the editor regarding t'othersiders

To the Editor of the "Adelaide
Register."
Sir, — It may interest many of your
readers to hear a few plain truths about
West Australia. Our Parliament is a.
farce, on a par with the ordinary Dis-
trict Council. Politically we t'other-
siders are in the same position as the
Uitlanders in the Transvaal. We are
supposed to have a vote, but the Elec-
toral Act is so manipulated that over
80 per cent are disfranchised (vido
electoral rolls). We t'othersiders pay
over eighth-tenths of the taxes through
the cruel and barbarous food duties.
The Government intend extending the
railway, from Coolgardie to the Norse-
man, thereby dragging goods and pas-
sengers 475 miles to Perth, whereas the
Norseman is 125 miles from Esperance
Bay, which has a splendid harbor. We
poor fools imagine we are under the
English flag. No such thing; we are
under the flag of Oom John and his
Boers. Some of the West Australian
Boers or Sandgropers hate us t'other-
siders like your modern Guy Fawkes
hates patriotism.
I am, Sir, etc.,
J. B. NEALES.
Mount Magnet, December 5.