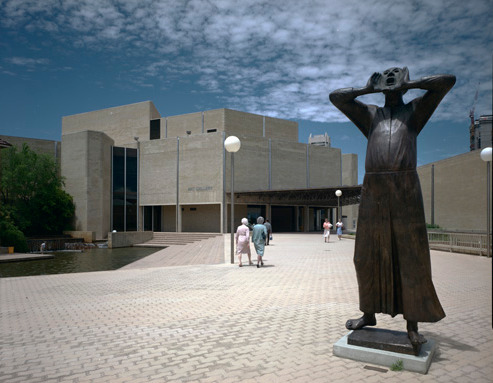 Notice the many straight lines, block shapes, and sparse windows which characterise the appearance of the Art Gallery of Western Australia.  They are features of the architecture style known as “Brutalism” which became popular in Perth from the 1960s.

Built between 1977-1979, this building was a modernist extension of the Art Gallery. Its creation at this time was a result of the increased prosperity brought by the mining boom of the 1970s.

From the 1960s, many Perth buildings from the 1800s were demolished and replaced by modernist structures characterised by a sense of ‘functionalism’ and simplicity in building shapes and forms. Other buildings, including the Art Gallery, were later extended with modernist additions.

Development of the building is ongoing. Today you can see the scaffolding for the Art Gallery’s new roof- top development.

Explore the historical photographs of the Art Gallery. What other differences do you notice between then and now?

Go inside the art gallery to see the some of the concrete brutalist structures in the foyer, especially the staircase and the triangular form ceiling.